Hei alle sammen! Well, we finally did it – after months of goodbyes, packing and trashing all our stuff, driving up and down California to visit family and friends, and finally boarding the plane after successfully checking 14 pieces of luggage (paying $150 in overweight baggage fees :'( ), we made it to Norway!

I wasn’t sure how I would feel once I was actually on the plane – i.e. whether I would have a breakdown and freak out – but once the wheels left the ground, I felt okay and ready for what would come next. I didn’t feel any regret, or question whether we had made the right decision in moving – the flight was not as dramatic as I’d expected! I ate a tasty SAS dinner, watched half of The Favourite (it was too wacky so I turned it off) and slept for 5 hours. No existential crises, no crying. The only thing I was stressed about, really, was how we were going to transport all of our luggage from the baggage claim to the house in Siggerud (and this also turned out to not be a big deal at all, which made me feel dumb about stressing out over this for literal months).

Our first week here has been great! We’ve had a lot of fun settling in, making ourselves feel at home/taking over Bendik’s parents’ house, and remembering all of the great things about Norway that made us want to move here in the first place.

(Getting koselig at home with a cozy fire and some candles)

I’ve been in such a good mood since we landed. Starting a new life is so exciting! We’ve been pretty on-the-go since we arrived, which most of our week dominated by logistical tasks, starting with visiting the local police station to announce my arrival in the country. I had high hopes for efficient, friendly Norwegian bureaucracy (since the immigration application process was so easy!), but was quickly reminded that government employees of all nationalities usually hate their lives and treat the public like cattle. Okay, it wasn’t THAT bad – but all the instructions on what to do at the station were in Norwegian (which, like… the whole THING is that we don’t.. speak… Norwegian? but I digress) – and the woman processing my application mostly spoke to Bendik in Norwegian, rather than to me, the actual person immigrating who would like to have SOME idea of what was happening. Then she very helpfully gave us just straight-up incorrect information on what I had to do next, and complained about government reforms. A lovely kickstart to my official personhood in Norway!

In spite of a mildly unpleasant first interaction with the Norwegian government, we were still in a good mood and went shopping at the mall and Ikea to stock up on even more stuff (you know, stuff, which we just spent the last month trying to throw away) that would make us feel at home. A couple hundred dollars later, we were in business. 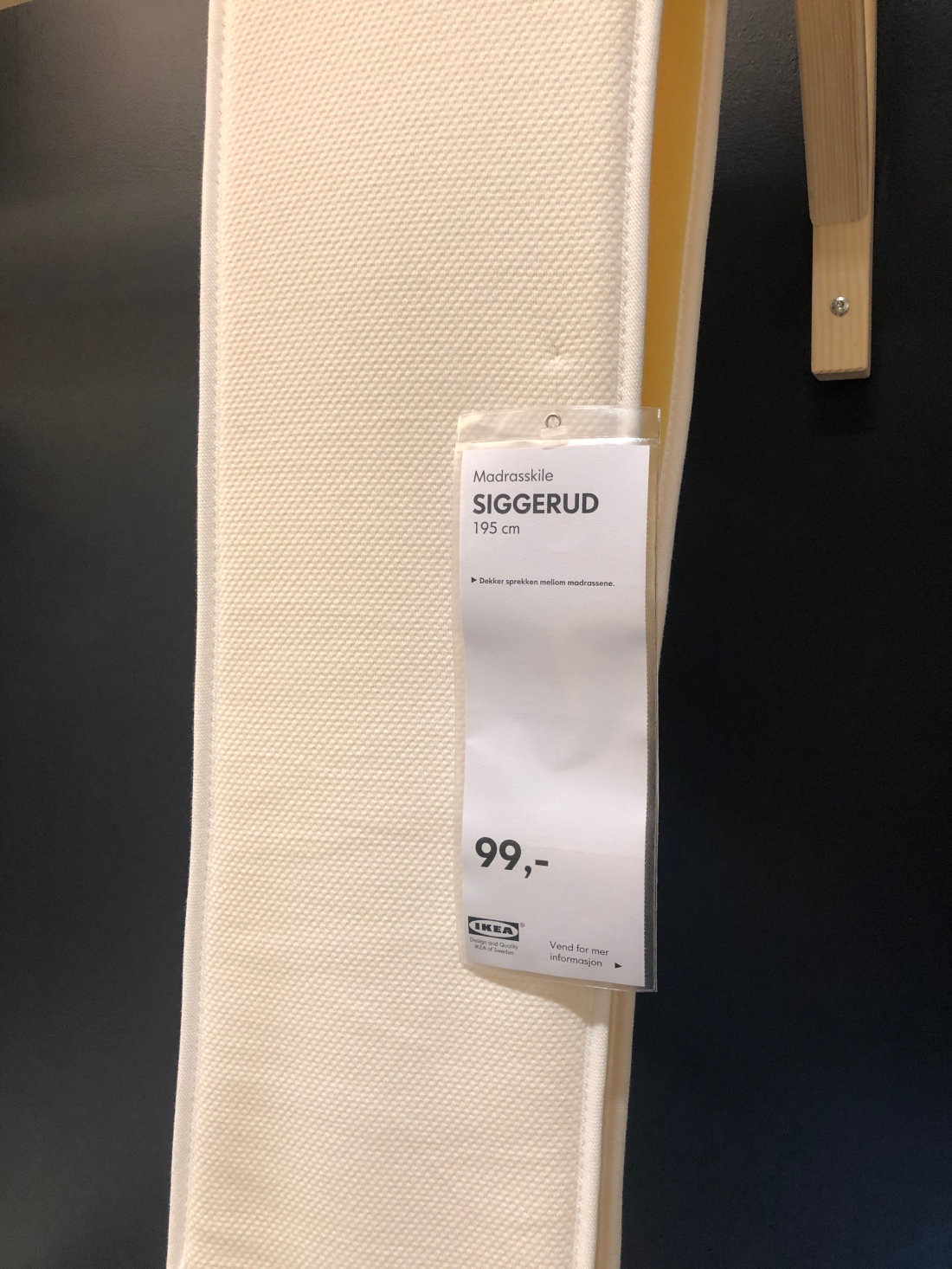 (Apparently our new hometown has its very own Ikea product, a… mattress joiner?)

It’s been so nice seeing all our friends and family again! I had been having some anxiety over feeling lonely and too far from my American friends and family, but seeing all my favorite Norwegians made me realize I’m not alone! They’re all here to support me and Bendik as we start our new lives here, and I feel so lucky to have such wonderful people in my life. I’m so happy we’ll get to spend so much more time with them! 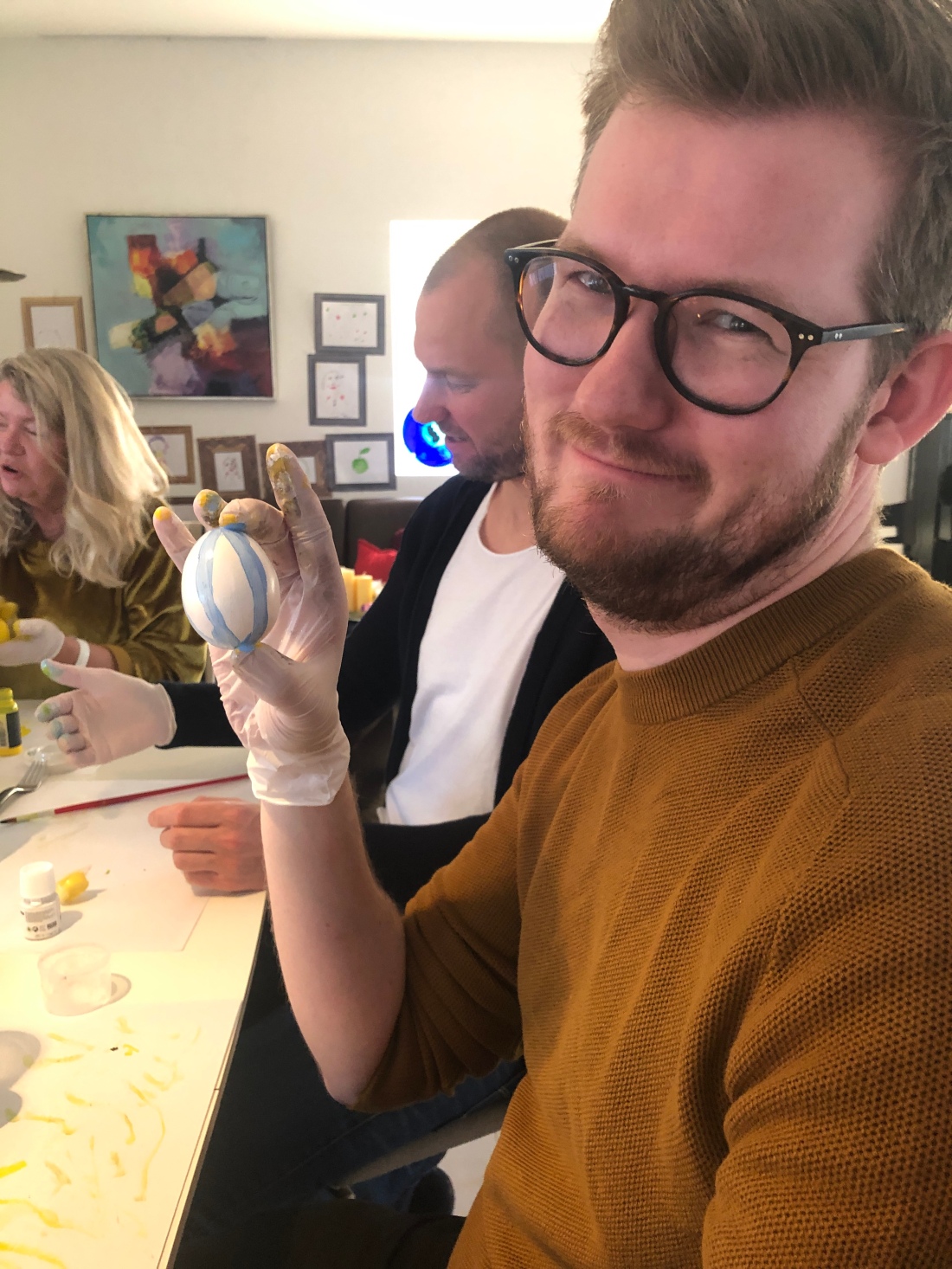 (Painting eggs at Bendik’s mom’s house, along with Cathrine and Marius!)

It’s also been comforting to fall back into our Norwegian routines – riding the bus into Oslo, drinking coffee at Tim Wendelboe, eating delicious pizza at Villa Paradiso, watching Tids Bonanza at night, eating Eli’s bread with the same pålegg every time. Having these routines, doing my favorite things, helps me feel more at home.

(Drinking some lovely $7 cups of coffee at Tim Wendelboe – worth it!!!!)

(Not the world’s greatest picture, but this is us enjoying lunch at Villa Paradiso, which has in my opinion the best ‘za in Oslo!)

I’ve also started living an Outdoor Lifestyle, having gone on my first walk through the woods with Eli, and my feet were NOT feeling great about my new non-sedentary life. I need to buy some serious hiking shoes if I’m going to live in the forest! But the walk was beautiful – it’s so peaceful and we didn’t see anyone else on the trail, which is a lot different than trying to go for a walk in Golden Gate Park, where there’s constant traffic (from both cars and humans). One of the reasons why I wanted to move here was to be closer to nature and be able to take deep breaths and smell the trees rather than pee and weed, so I’m really excited to get out of the house every day, even if it’s just for a short walk. 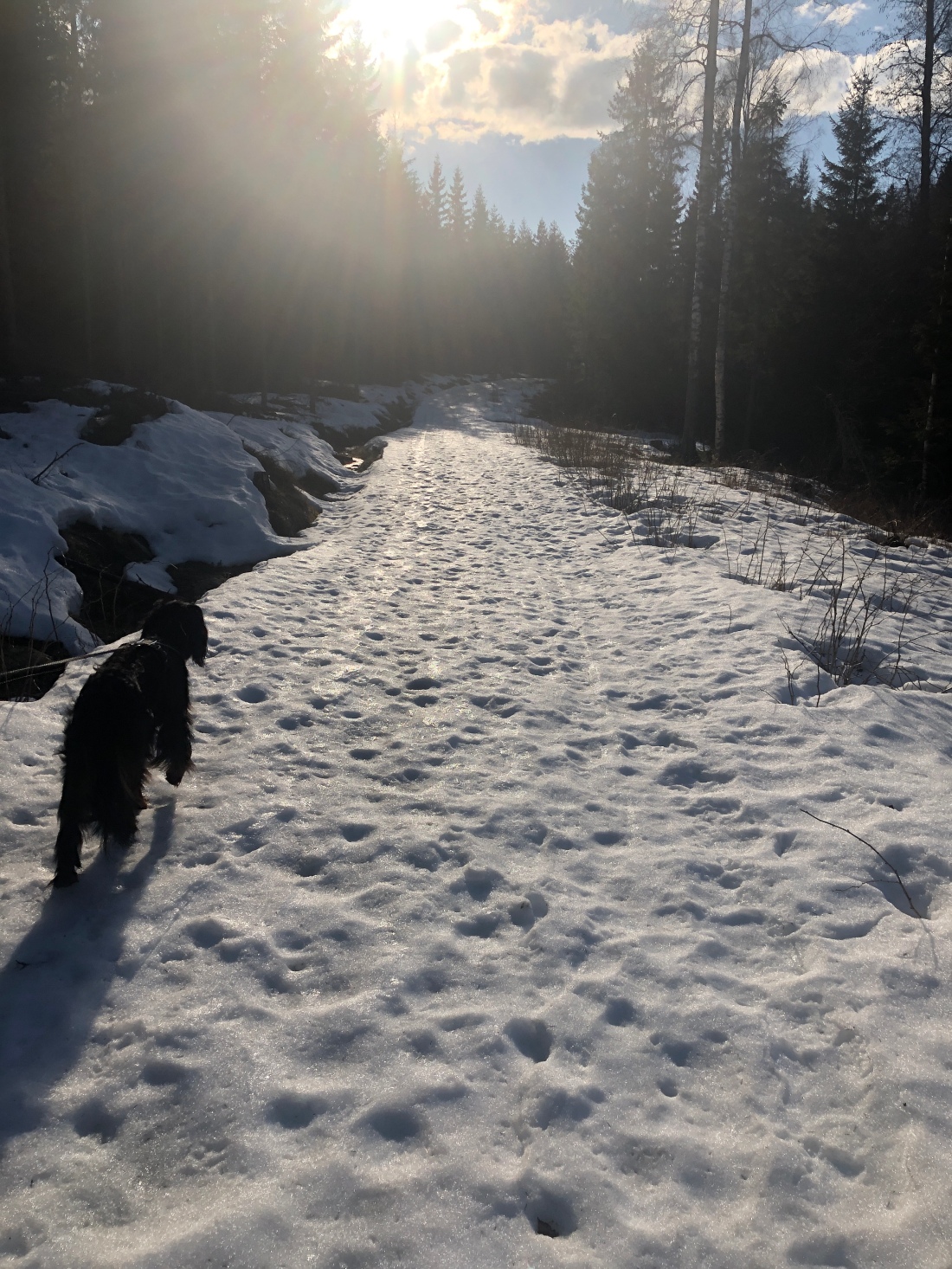 So now that we’ve been here a week, what’s next? We still haven’t fully unpacked, so will spend the weekend rummaging through suitcases and trying to find a good spot for all our Ranch dressing packets, boxes of Funfetti mix and flamey Crocs. We have an appointment with our architect/designer coming up, where we’ll talk more seriously about kicking off the house project, and next week, I have both my first driving lession (eeeeek!!) and language aptitude test at the local learning center where I’ll talk my Norwegian classes! We also need to sign up for a cell phone plan (but that has to wait until we have to drive an hour and a half to a tax office to announce in-person that Bendik lives in the country again, so that the cell phone provider trusts he’s a real person that is responsible enough to have a plan), and we need to get a car (also waiting on Bendik’s official residency proclamation).

I’ll also start work on Monday, adjusting to my new 3-11pm schedule, which will be interesting. I haven’t worked the afternoon/night shift since I was in high school, so I don’t know how it’ll feel to work so late. But, it’s a huge blessing to be able to keep my awesome job, so I really can’t complain!

Just to round out the post, here are a few other pics from our first week here:

(Just some of our luggage that miraculously made it all the way to Siggerud, thanks to Arne Gunnar’s megavan!) 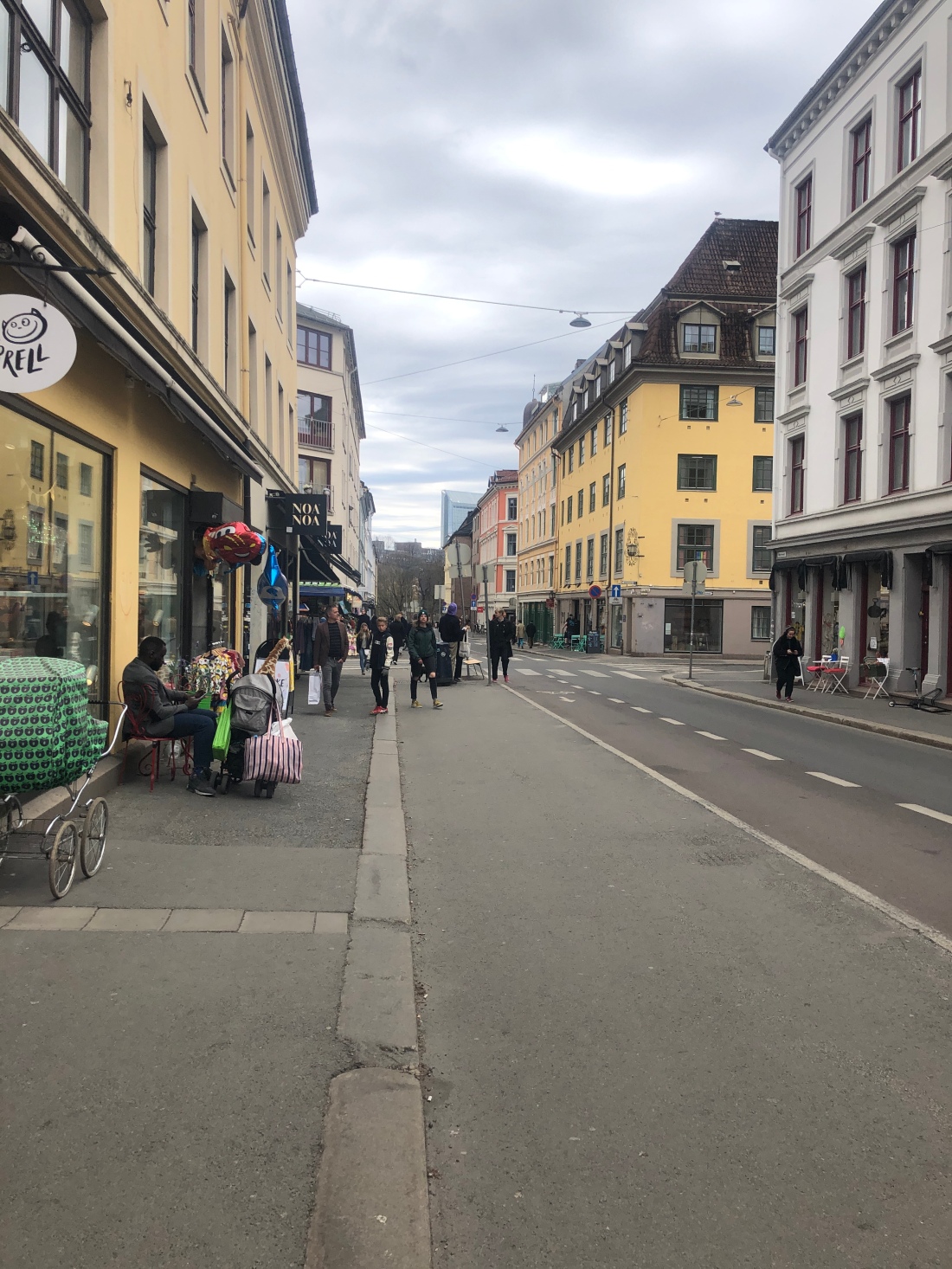 (Back on the streets of Grünerløkka, our favorite neighborhood in Oslo!)

(I was pleased to find that the local Meny sells Julius’ favorite bread – Julius being the most famous and beloved monkey in Norway that lives at the zoo in Kristiansand. If Julius likes it, then I like it, too!)

(The house is in the exact same shape we left it in, which is dilapidated. But, things are moving forward – we’re hopefully going to confirm a builder in the next week or two, and fingers crossed they can get crackin’ SOON!)

Overall, a great first week! I’m in a super good mood, the påskesola is shining, I’m remembering all the great things about Norway and am feeling confident in our decision to move!

So, just a quick update this time – not sure how often I’ll do updates like these (maybe once a month or so?) but I thought it would be good to write about how the first few days here went so someday I can come back and remember the fun early days of the move :)

hi View all posts by Tabby

4 thoughts on “Velkommen til Norge – my first week in Norway!”